Founded in 2006 by Jack Dorsey, Evan Williams, Noah Glass, and Biz Stone, Twitter is a very popular microblogging and social networking platform where users are communicating and staying connected via quick messages and interactions.

Twitter is generally used for sharing thoughts and information with a big audience, keeping up with local and global news, following celebrities and brands, and for following and communicating with friends. Used by millions of people around the world daily, the easy to use platform has become a one stop shop for millions of people from different countries, languages, cultures, and views.

Twitter is also a great channel for both small and large businesses for marketing to increase their brand awareness and to let their audiences get in touch with them in seconds. Via Twitter, brands and businesses share their important updates and company or customer-related news, answer their audience’s questions, and even watch closely their competitors to create a competitive advantage.

+ According to Sensor Tower, Twitter ranked 9th among all free iOS apps in China on November 29, from 150th a week ago.

+ Twitter revealed that it miscounted its monetizable daily active users from Q1 2019 to Q4 2021. The figures in the table below have been updated after Twitter’s announcement.

– Twitter’s average monetizable DAUs was 197.6 million in the first quarter of 2021, up 20% year over year and up 7 million sequentially. (Twitter)

– Average monetizable daily active users of Twitter was 186 million in the second quarter of 2020, increased by 34% year over year. (Twitter)

– Twitter topped its record for installs on June 3, 2020 with 677,000 worldwide downloads and 140,000 U.S. downloads during protests over George Floyd’s death and the Coronavirus pandemic. 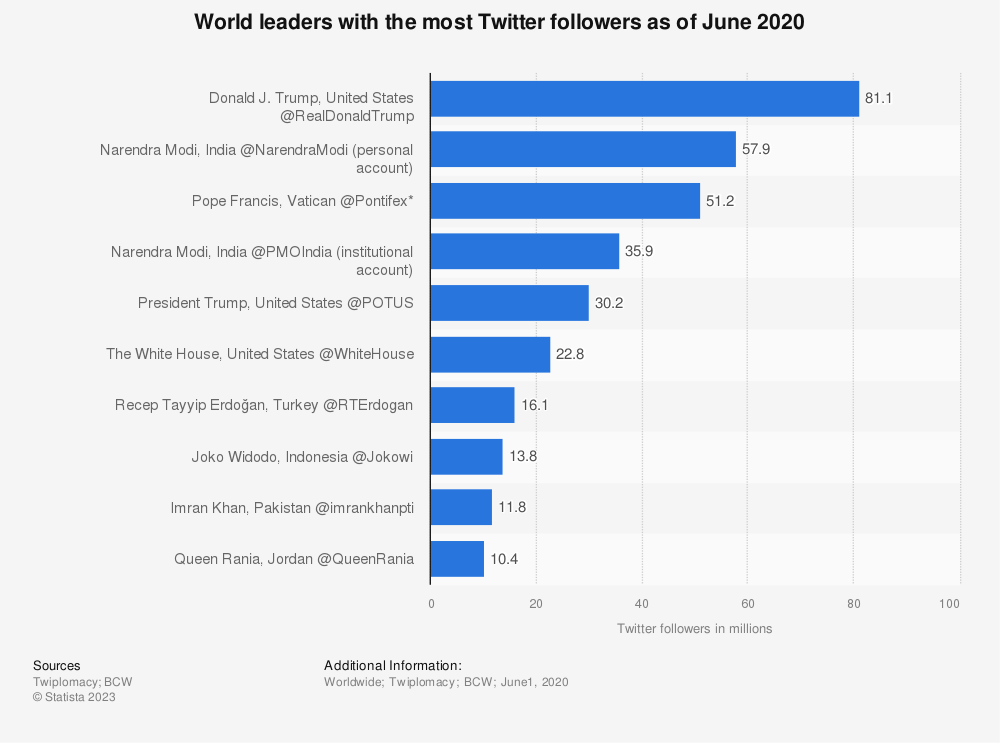 – eMarketer predicts that the number of Twitter users in the United States will reach 53.6 million in 2023. (eMarketer)

+ Twitter revenue for Q2 2022 was $1.18 billion, a decrease of 1% year-over-year. The company said costs related to the pending acquisition of Twitter were approximately $33 million in Q2. In mid July, Twitter sued Elon Musk for his attempt to walk away from the $44 billion takeover bid.

+ Twitter revenue for Q1 2022 was $1.20 billion, an increase od 16% year-over-year, reflecting headwinds associated with the war in Ukraine. When excluding MoPub and MoPub Acquire,
year-over-year growth was 22%.

+ Twitter announced on April 25, 2022 that it has accepted Elon Musk’s bid to acquire the 16-year-old social networking platform for $44 billion. Stockholders will receive $54.20 in cash for each share of Twitter.

+ For Q4 2021, Twitter revenue reached $1.57 billion, with ad revenue of $1.41 billion, both up 22% year over year, driven by ongoing revenue product improvements, solid sales execution, and a broad, continued increase in advertiser demand.

+ In January 2022, AppLovin closed the acquision of Twitter’s MoPub for over $1 billion.

+ Twitter reported that its Q3 revenue rose 37% to  $1.28 billion and avoided the revenue hit from Apple’s privacy changes. The company forecast Q4 revenue between $1.5 billion to $1.6 billion. In the third quarter of 2021, Twitter said its total advertising revenue was $1.14 billion, an increase of 41%, meeting revenue estimates.

+ Q2 costs and expenses of Twitter totaled $807 million, an increase of 5% year over year. This resulted in an operating loss of $124 million and -18% operating margin, compared to operating income of $76 million or 9% operating margin in the same period of the previous year. (Twitter)

A tweet means any message posted on Twitter that can be an image, a video, a text, a link, a gif, or a poll. Users can create tweets, that should include up to 280 characters, and post it immediately or schedule it for a later time. A user has a limit of 2400 tweets per day and retweets are counted as tweets.

It is also allowed to delete any Tweet at any time but users can only delete their own tweets. Tweets should be deleted one by one, meaning there is no way to delete multiple tweets at a time. A deleted tweet is removed from the user’s profile, Twitter’s search results, the timeline of any accounts that follow the user, and from the retweets. However, if another user has copied and pasted part  or all of a tweet into his/her own tweet, it is not removed.

Twitter also rolled out a new feature called Quote Tweets that enables users to see when someone else retweets their tweets with a comment. The feature is located between ‘’Retweets’’ and ‘’Likes’’ labels.

next to the name of the person who retweeted the tweet. Users can see Tweets people they follow have retweeted and quote tweeted in their Home timeline. However it is not allowed to see retweets and quote tweets from accounts blocked.

It is allowed to turn off retweets for a specific account by selecting “Turn off Retweets” from the account profile page by clicking the gear icon or the overflow icon.

A retweet can be undone by clicking on the Retweet icon in the tweet. If there is a lock icon next to someone’s name on the profile page on his or her tweets, it means it  is not allowed to retweet his or her tweets.

A direct message can be sent to one single person or to a group of people who follows you. In group conversations, users are allowed to add other users from their followers. However it is restricted to send a direct message to a person you block.

When a direct message (DM) is deleted, it is only removed from the account of the user who deleted it.

The limit is 1,000 direct messages sent per day.

Adding a “#” to the beginning of a word or a phrase creates a hashtag. Using hashtags in a tweet makes it linked to all other tweets that use the same hashtag and it increases the opportunity of a tweet to be seen, retweeted, liked, and replied by more people following the hashtag.

There are some popular hashtags including #tuesdaymotivation, #photography, and #funny. Single users and businesses prefer using hashtags to increase their tweets’ impressions and maximize the interaction. What important while using hashtags is relevancy with the tweet’s content.

A Tweetdeck is a dashboard provided by Twitter, letting users to view and manage multiple timelines in one interface. It is a free to use dashboard where users can pick their favorite timelines like Followers, Mentions, Messages, Home page, user profile, and more, and see them in a single page without having to leave any page.

When you block someone on Twitter, the account you blocked can’t follow you and you also can’t continue following that account. A blocked account doesn’t get a notification when you block it but if the blocked account visits your profile and tries to see your tweets, it will see that you’ve blocked.

Blocked accounts can’t view or find your tweets, send DMs (direct messages), view your followers and following lists, add you to a Twitter list, or tag you in a photo.

Pinned tweets are mostly used to show the most retweeted, liked, or replied tweet or to show the newest tweet to new followers in order to get more interaction.

After signing in to your Twitter account, if you have any, you need to go to the ‘Profile’ section and copy the web address in your browser’s address bar. Your Twitter URL will be something like: https://twitter.com/mmarketingreads