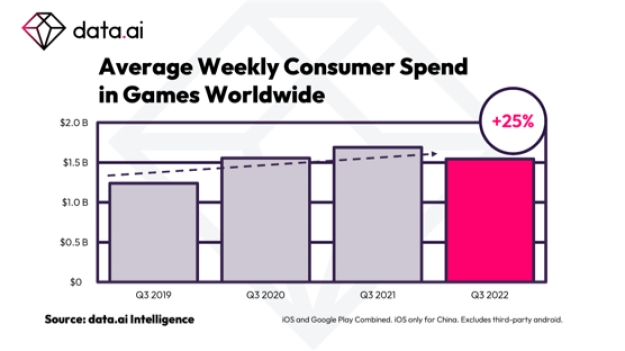 In the third quarter of 2022, gamers around the world spent over $1.54 billion per week on mobile games and downloaded over 1.1 billion new titles, according to new data from Data.ai (formerly known as App Annie). While the figures are slight down on a yearly basis, they’re still 25% higher when compared to the third quarter of 2019.

According to the Q3 2022 Games Index report, almost half of Google Play Store’s 30 billion downloads were driven by mobile games. Meanwhile, App Store games accounted for nearly one third of the overall iOS downloads, which hit 8.7 billion.

When it comes to player spending, however, iOS games made up more than half of the total App Store revenue with $21 billion, while Android games generated two thirds of Google Play’s $11.4 billion.

According to the report, the reason for this difference is that the popularity of the app stores varies by country. For example, while Google’s Play Store is more trending in developing markets such as Brazil and India, Apple’s App Store is more popular in China and the United States.

Honor of Kings, on the other hand, generated the most revenue during the quarter from consumer spending. It was followed by Candy Crush Saga, Game for Peace, Genshin Impact and ROBLOX.

Meanwhile, ROBLOX, Candy Crush Saga, Subway Surfers, Free Fire and Ludo King rounded out the Top 5 when it comes to the number of monthly active users.

According to Data.ai, worldwide gaming revenue will reach $222 billion by the end of this year, and 61% of it will come from mobile games.