What is Apple Music?

Apple Music, available on the App Store and Google Play, is Apple’s music streaming app that lets you listen to more than 75 million songs, create your own playlists, get personalized recommendations, and see what your friends are listening to.

Apple Music, one of the most popular music streaming apps in the world, offers features such as offline listening to your favorite tracks, real-time lyrics tracking, access from all your devices, new music specially selected for you, and playlists prepared by its editors.

Already built into Apple devices, you can access Apple Music from smart TVs, smart speakers, Android and Windows devices, or at music.apple.com.

Apple Music offers 3 different subscription options but it also allows you to try any option for free before purchasing.

+ J.P. Morgan estimates that Apple Music will generate a revenue of $7 billion and a subscriber base of 110 million by 2025.

+ As of June 2021, Apple Music reached 78 million subscribers worldwide, up 6 million as compared to December 2019. 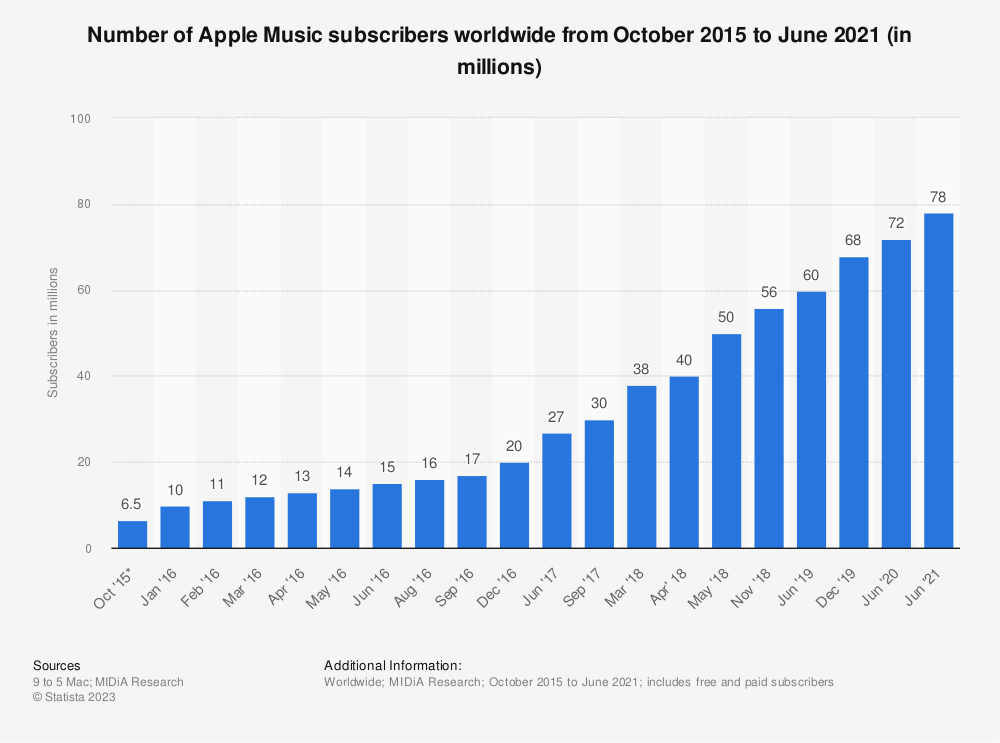 When it comes to sound quality, the two platforms use different audio formats. Apple Music is AAC compatible while Spotify uses Ogg Vorbis. Although the streaming quality varies in premium and free use, Spotify Premium broadcasts at 320kbps and Apple Music as 256kbps. Apple has developed its own lossless audio compression technology called Apple Lossless Audio Codec (ALAC). In addition to AAC, the entire Apple Music catalog is now also encoded using ALAC in resolutions ranging from 16-bit/44.1 kHz (CD Quality) up to 24-bit/192 kHz.

In May 2021, Apple announced Dolby Atmos support, Spatial Audio, and Lossless Audio for its online music service Apple Music. As of June 2021, there is no additional fee required to experience the new features offered to Apple Music subscribers.

The Lossless Audio feature, as the name suggests, aims to provide users with a lossless audio experience. With the feature , Apple Music subscribers are able to listen to more than 75 million songs in high resolution over real audio files instead of being compressed into any file format.

Regarding Dolby Atmos support, Apple says “Apple Music is making the biggest (for its part) advances in sound quality ever” and aims to deliver a revolutionary, immersive audio experience with Dolby Atmos in Apple Music. Apple continues to add new Dolby Atmos supported songs to its music service every day and releases special playlists for Dolby Atmos songs.

In terms of user experience and interface, both music streaming apps offer a satisfying experience. The difference of Apple Music here is that you can reach the song by typing the lyrics of a song whose name you do not know. In this sense, it works as a kind of Google and gives results in written searches.

One of the most important reasons to use such platforms is to discover new music. For this reason, the discovery algorithm and diversity gain importance. Spotify has a weekly discovery list and personalized lists. At the end of March 2021, Spotify rolled out Spotify Mixes, new personalized playlists featuring your favorite artists, genres, and decades, globally. Apple Music also offers discovery lists such as ‘For you’ and ‘New music mix’.

In this area, Spotify’s algorithm and recommendations for listening habits are more advanced.

Stats for Apple Music vs Spotify

According to eMarketer’s latest forecast, Spotify’s US podcast listeners will overtake Apple Podcast’s in 2021. The report estimates that in 2021, 28.2 million people will listen to podcasts on Spotify on a monthly basis, while 28.0 million will listen via Apple Podcasts.

Amazon Music Unlimited and Apple Music are very close to each other in many aspects such as the music library they offer, the mobile and desktop sound quality they support, the platforms they are available on and their subscription costs.

In terms of sound and music quality, both music streaming apps support lossless audio features. As mentioned above,  in addition to AAC, the entire Apple Music catalog is also encoded using ALAC in resolutions ranging from 16-bit/44.1 kHz (CD Quality) up to 24-bit/192 kHz.