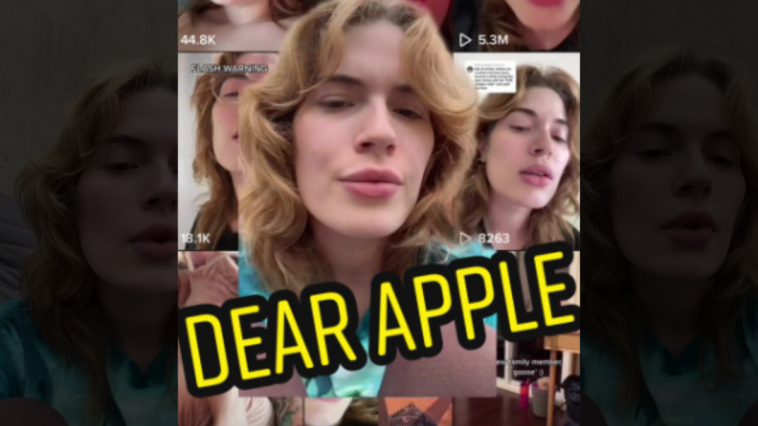 An Apple employee named Paris Campbell claimed that the iPhone-maker threatened to fire her over a video she posted on TikTok which got more than 7 million views and 1 million likes.

Campbell has been working at Apple for over 6 years now, and is also quite popular on TikTok where she currently has 446.2K followers and 17.7 million video likes in total. Last week, she responded to a video of a woman named Stella who said she’d lost her iPhone at the Coachella festival and some people are threatening to sell her personal info on the black market if she doesn’t remove the stolen device from her Apple ID.

Campbell started her video saying, ”I can’t tell you exactly how I know this information, but I can tell you that for the last six years, I’ve been a certified hardware engineer for a certain company that likes to talk about fruit,” and went on recommending her not to do what they had asked.

”Your phone is actually useless to them, and you’re the only person that can save them, and I suggest that you don’t,” said Campbell. The video has got over 7.5 million views and 1.2 million likes so far.

Three days after responding to her, Campbell shared another video claiming that her manager gave her a call saying she breached the company’s policy by revealing her identity publicly as an Apple employee. However, Apple’s policy actually doesn’t prevent employees from sharing publicly that they’re working for Apple, but from revealing confidential information.

“Funny thing is, though, after reviewing the social media policies, nowhere does it say I can’t identify myself as an Apple employee publicly, just that I shouldn’t do so in a way that makes the company look bad,” said Campbell. “If you ask me, reinforcing the public’s confidence in Apple’s security is not something that makes the company look bad, especially when it reaches 5 million people. If we want to get technical, I’ve never actually identified myself as an Apple employee until this video,” she added.

Her manager also told her that the company doesn’t pay her money to make TikToks. While she agrees to that, she says she is obviously good at it. ‘’Talking about your products and tech in general and how people can deal with it in their everyday life is kind of the thing that I’m best at,” said Campbell. “Maybe instead of reprimanding me, you should be looking through the comments and seeing the amount of people that are thanking me,” she continued.

She went on saying that she has been working for Apple for six years now and would like to continue working for them. ”I have been a stellar employee, and that’s evident by getting exceeded expectations on almost every single one of my reviews,” she said.

Here is her video where she addressed the issue: