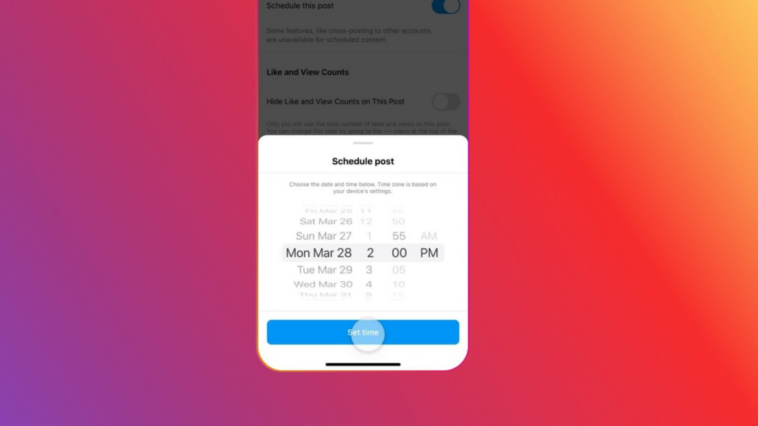 Instagram announced on Tuesday that it has started rolling out its new in-app scheduling feature to businesses and creators allowing them to schedule Reels, photos and carousel posts up to 75 days without relying on any third party tools or Facebook Creator Studio.

The announcement arrives weeks after Instagram confirmed the tests after a Twitter user posted screenshots of the feature. While professional accounts are the first ones to access the new tool, it will be rolled out globally in the upcoming weeks, the company said in a statement.

To schedule photos and Reels on Instagram using the new in-app tool, you need to create your post first and then click on the ‘’Advanced Settings’’ option which appears on the post sharing screen. From there, tap the ‘’Schedule this post’’ option and select the time and date when you want it to be posted. Return to the post sharing screen and then tap the ‘’schedule’’ option.

You can check out all your scheduled posts and edit them from the ‘’Scheduled Posts’’ section which you can access from the hamburger menu.

Instagram also announced that it has started testing a new feature named ‘’Achievements’’ globally, which will let Reel creators unlock achievements when they take certain actions like collaborating with other creators, engaging with their followers by making their videos more interactive using stickers, posting more than one video in a week, etc.

After sharing their Reels, Instagram will inform them when they unlock an achievement via a notification. In addition, they will also be able to check out the achievements they have or the ones they could earn by clicking on the three-dot menu that appears at the top of videos.

Meta also recently announced that it has started testing the ability to mint and sell nun-fungible tokens (NFTs) directly on Instagram.